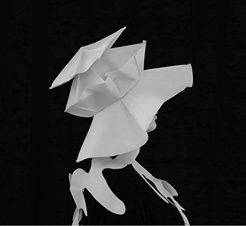 The romantic landscaped park at Liselund, on the island of Møn in Denmark, with its little palace and Chinese, Swiss and Norwegian guest houses is poetic and a little magical. The costumes for the production of The White Lady were inspired by nature and by Marta of Liselund who lived independently as lady of the manor surrounded by literary figures and a beautiful park filled with a collection of white animals. I looked at the shapes and structures of different leaves, a running peacock, a giant mushroom, the wrinkled bark of a tree and devised costumes that are symbolic rather than realistic. The modular pieces are all white and made of strong waterproof blind fabric and corset boning. The white stands out against the black worn by the performers and the luscious greenery of the park. The park is filled with moving sculptural figures. Two Martha – a petal Martha and a mushroom Martha – appear to float across the grass in their long skirts interacting with the performers, the public and their surroundings.